Mother Octopus is an example of true selfless motherly love. We already know that mothers go through a lot of sacrifices. Every mom in the world has to suffer a lot of pain and hardship for the proper upbringing of their child. Be it animals or humans, mothers are one of the best gifts in the world.

There have been instances where a mom had died while giving birth to her child. We are also aware of other thrilling stories that define moms as real superheroes. However, the most tragic stories are that of the octopuses.

The Octopus is an eight-legged animal that mostly dwells in deep-sea waters. A recent study has brought a fascinating piece of fact about the Octopus. The Mother Octopus dies after giving birth to their young ones. This process was filmed by a renowned underwater enthusiast, Bruce Robison.

In the year 2007, Robison put a submersible into a canyon. The canyon was located at the Bay Of Monterey, California. The submersible spotted a female octopus lying at a depth of about 1400 meters. Bruce decided to track the octopus and thus put the sub under the water once again.

Thirty-eight days have passed since the octopus was first seen. The sub captured an adorable moment while under the water. They spotted that the Octopus had climbed up a slope made up of rocks.

On further inspection, it was found that the octopus was guarding her eggs. More than one hundred and sixty eggs were being guarded by the mother octopus. The octopus was seen scarred from the effort made for climbing the rocks.

From here starts a very sad story of how a mother dies to give her children a new life. Let us learn more about the tragic story of the mother octopus in detail below.

This means that the octopuses do not eat or drink. The creatures do not excrete for the whole period as well. The female creatures require wafting of currents over the eggs to ensure the supply of fresh oxygenated water.

Another amazing discovery stated that the Mother Octopus does not sleep. This helps it look for the possible predators looking to snack on the eggs. The process of guarding the eggs continues for fifty-three weeks. It is usually after these fifty-three weeks the most tragic part comes.

Starved, exhausted, and bruised, the octopuses die as their young ones live on. This process has been referred to as the highest form of sacrifice a mother can make. Jim Cosgrove is a renowned biologist. He became teary-eyed while speaking on the topic.

There has been no concrete evidence as to how long the Mother Octopus has to guard its eggs. It has been found that the period can last over four years.

The experiment carried by researchers showed the mother octopus glued to its place. It remained there for almost five years. Crabs and shrimps were spotted all over the octopus’s lifeless body.

One can only imagine the amount of pain undergone by the Mother Octopus. 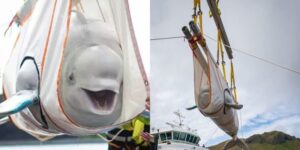